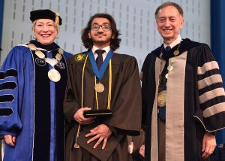 We hope you and your loved ones are well and staying safe. We want to share memories of our fellow classmate and friend, Vaibhav “Vab” Arya '17. Vab passed away in early September and we are deeply heartbroken with this news. He is remembered for his inspiring demeanor and his tremendous friendship to so many people.

Throughout life, you will meet many different people. Some of those people may only be in your life for a minute, others will be in it for a day, or a month, or a year, and some may even be in your life forever. Some people have a gift of being able to have a positive long-lasting impression on nearly everyone they meet. They can bond with anyone they run into and talk with them for hours about nearly every topic. Sometimes you meet someone so different than most. Their views of the world are so clear and their goals are ambitious. They wake up every day ready to take on the world. Vab was one of those people.

While at SUNY Poly, Vab was honored with the prestigious President’s Award for his distinguished academic record, his demonstrated leadership and exceptional standards of moral characters. He also worked as a resident assistant, as a tutor in the learning center and still found the time to participate in student government.

After graduation, with degrees in computer science and psychology and a minor in applied mathematics, Vab became a Research Master student in cognitive neuroscience at Radboud University in the Netherlands. He investigated the role of the prefrontal cortex in controlling automatic action tendencies in humans. Besides his tremendous academic honors, Vab will be remembered most for his contagious energy, inspiring enthusiasm and profound intellectual curiosity. He leaves a big hole for all of us.

Vab always saw the good in everyone. He was great at understanding that we all have different views and he tried his best to understand every single one of them. He would spend hours studying, researching, and trying to understand why people think the way they do. Vab seemed fearless. He was an idol, a role model, someone we all wanted to be. He pushed us, and a lot of others, to be a better version of ourselves.

He had a way of making us all feel unique, special, and important when he spoke to us. When you were feeling lost, confused, or clueless, he was there to help guide you. He made the world seem clear. He was a tutor to life. He showed us, and many others, the world, who we were, and how we belonged. When he spoke his words of wisdom, he sounded like a true philosopher. He was always so articulate and he was an inspiration, a true piece of art.

The world lost a wonderful person and a great scholar. With his passion, he was destined to accomplish so much good during his life. To honor Vab’s memory, his intelligence, thirst for knowledge and the impact he had on many, we are planning to establish a scholarship to celebrate the impact he had on our community. We invite you to make a gift to this initiative, in any amount that is comfortable to you.

We thank you for joining in our efforts to carry on Vab’s legacy and to inspire SUNY Poly students to be the best versions of themselves.