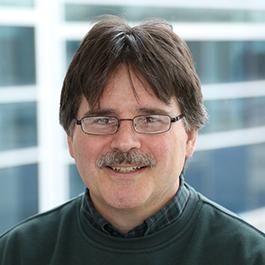 Surface/Interface Science: The performance of a solid-state device is often affected by the electrical, magnetic, and chemical properties of the surfaces and interfaces of the constituent materials of the device.  For instance, the device performance of field effect transistors and metal/semiconductor Schottky diodes is usually governed by interface states.  Materials that exhibit ferromagnetic ordering in the bulk may have a drastically different Curie temperature in the surface region or may exhibit no ferromagnetic ordering at all.  Surface reconstructions are common for most semiconducting materials, and these reconstructions are often accompanied by a change in the band gap or even a conversion to metallic behavior at the surface.  These are just a few of the examples of where the surface or interface properties need to be considered to properly understand the performance of solid-state devices.

Graphene-based Nanoelectronic Devices: Graphene is a single atomic layer of graphite.  It has many unique properties that are of particular interest for the development of nanoscale electronic devices.  It is a semi-metal whose charge carrier density can be continuously tuned from n-type to p-type by applying an electric field; it has a linear energy-momentum dispersion in the vicinity of the Dirac point; its mobility is higher than almost all of the known semiconductors.  However, one of the primary issues that must be addressed before nanoscale electronic devices can be routinely fabricated is the development of methods for growing large-scale, high-quality, single-layer graphene sheets on semiconducting substrates.  My research group is investigating the growth of single-layer graphene films by methods such as the thermal reduction of graphene oxide sheets and the precipitation of graphene at the surfaces and interfaces of transition metals.

Surface Electronic and Magnetic Structure of Half-metallic Oxides: Half-metallic ferromagnets are solids whose conduction electrons undergo magnetic ordering with a spin polarization of 100% at the Fermi level.  Since the conventional ferromagnets typically have spin polarizations of less than 50%, the performance of devices such as GMR sensors or TMR spin valves should increase dramatically if the conventional ferromagnetic materials are replaced with half-metallic materials.  However, devices based on half-metallic materials almost always show a decrease in performance instead of an enhancement.  One possible source of the poor performance of devices based on half-metals is a deviation from metallic or ferromagnetic behavior at the interfaces within these devices.  Therefore, my research group performs measurements of the surface structure and corresponding electronic and magnetic properties of half metallic oxides such as chromium dioxide.

Growth and Characterization of Self-Assembled Monolayers: SAMs are molecular films that self-terminate at a single monolayer and usually show some order.  Molecular electronics devices can be formed via the growth of semiconducting and insulating layers of SAMs.  Most groups grow SAMs on Au substrates because of its inertness.  However, if one is to couple molecular electronics devices with conventional Si-based electronics, metal substrates other than Au should be used since Au diffuses into Si, adversely affecting its semiconducting properties.  My research group focuses on examining the growth morphology and resulting electrical properties of SAMs on Pt, Ag, and Cu substrates, which are all more "Si-friendly" metals.

Stability of Polar Oxide Surfaces: For ionic materials, surface instabilities result from terminating a crystal at a polar surface.  Most often, these polar surfaces will facet into surface structures with non-polar terminations.  However, there are some instances, such as the p(2x2) octopolar reconstruction of NiO(111), where simple surface reconstructions can stabilize the surface.  My research group focuses on developing methods for growing materials with polar surface terminations that have simple reconstructions and characterizing the corresponding electrical and chemical properties of these unique surface terminations.