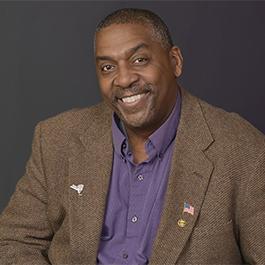 Dr. Mark Montgomery was born and raised in Bridgewater, New York. He and his 6 siblings grew up on welfare. He graduated from Mt. Markham a D student and ranked 112 out of 126 students. Most of his life, he struggled to overcome asthma and still struggles with stuttering.

He earned his associate’s degree in Human Services, from Mohawk Valley Community College accompanied by several awards for academic excellence. He earned his Bachelor’s degree in Psychology at S.U.N.Y IT. He earned a Masters in Education from the University of New England with a specialization in academic motivation; specifically, those of inmates. In February, 2014, his Ph.D. in Education was conferred. Local officials tell Dr. Montgomery that he may be one of the first five men of color from central New York to attain a Ph.D. Dr. Montgomery’s dissertation focused on students at risk of academic failure in English language arts. Along with being an IAABO (I-BO) ranked basketball official, Dr. Montgomery holds a 2nd degree black belt and teaches Tae Kwon Do.

He has taught a wide range of Psychology and study skills courses. Over 35 years he has spoken to many schools in New York on bullying, self-esteem, drugs use, appropriate social circles, and the search/pursuit of academic excellence and the consequences of academic autonomy. To date, has conducted over 55 academic workshops and seminars at collegiate level conferences. In 2015, Dr. Montgomery began providing workshops in the primary and secondary school environments to train & inspire faculty, administrators and other key stakeholders how to motivate students across cultural lines.  In 2008, he received Educator of the year award. In 2009 he was nominated for the prestigious SUNY Chancellor’s award for excellence in service. In 2015, he received the Outstanding Community Service award from the Mohawk Valley Frontiers, Contribution to Black History from the NAACP, Contribution to Education and Community Service Award, and on May 26 2015, he was honored with the Leadership Mohawk Valley Award for Leadership. In 2016, he was named Grand Marshall for the Regional Independence Day Parade. In 2017, he was named the Friend of Children of the year for his efforts serving children with Cancer. In 2019 he received the NYS Commendation for lasting contribution to community. His most recent award came from SUNYPOLY as they named him Alumnus Emeritus from his alma mater for his efforts. In addition to keynoting SUNY Poly’s convocation, he has keynoted several commencement addresses.

Dr. Montgomery is a member of the Genesis Group and was recently Dean of Public & Human Services at his alma mater Mohawk Valley Community College. He is an Education Consultant and Retention Specialist. On July 1st he was named to his first senior leadership position after being name the first Chief Diversity Officer in SUNY POLY history. In October of 2016, Dr. Montgomery provided his first Tedx talk “Retention, The Powerful Hypothetical Construct.” He has served (s) on the race-relations and Second Chance committees with the District Attorney’s office. He is a board member of the Stanley Theater, Opiate Task Force, Utica’s Police Reform Committee, and serves on the Access and Inclusion Committee in Utica, NY.

In 2011, with the help of his wife Lisa (a retired teacher of American history), Dr. Montgomery, a survivor of scarcoidosis [pronounced SAR-COY-DOSIS] (a blood born pulmonary disease) founded The Montgomery Experience which has morphed into Joseph’s Experience, a not for profit which aims to positively impact children who suffer from diseases such as Cancer and Leukemia. Dr. Montgomery chairs this initiative. This organization also honors his brother Joe who lost his battle to Cancer. On August 26th of 2017, Dr. Montgomery completed a bicycle ride in all 62 counties of New York State to honor law enforcement, first responders and those who suffer. He has dedicated his life to God and making a positive influence on the lives of others. His first book, under the theme of student retention, titled “Painting the Academic Canvas with Students of Color, assuming you can retain them” was released in the spring of 2017. He is currently working on his second book “Curing Ignorance with a Dose of Cancer.”