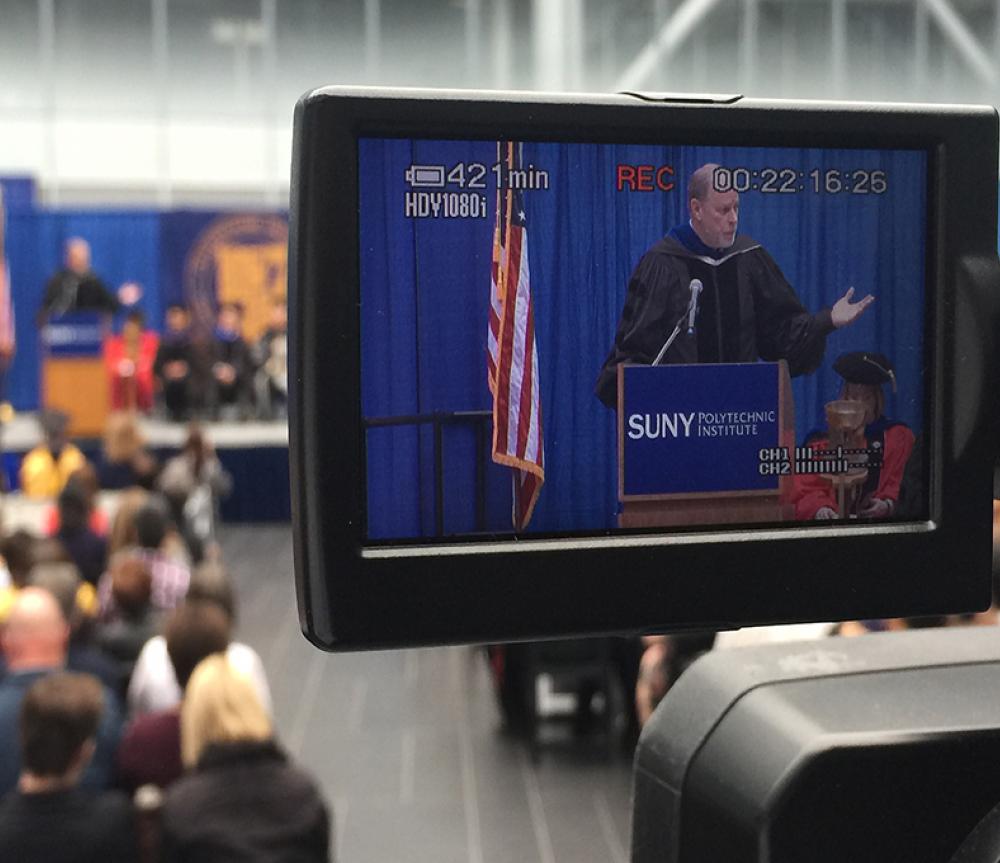 The ceremony took place after SUNY Poly bestowed degrees during the institution’s 44th annual Utica campus commencement, with ceremonies held on Friday, May 4 for those graduating with graduate degrees, and on Saturday, May 5 for students graduating with undergraduate degrees. In total, more than 700 students were recognized during ceremonies held at both SUNY Poly campuses.

“I am proud to congratulate SUNY Poly’s latest graduates, many of whom are poised to leverage their unique, hands-on education and life experience that they obtained at SUNY Poly to thrive in some of the most challenging, yet exciting high-tech careers that are available in New York State and beyond,” said SUNY Polytechnic Institute Interim President Dr. Bahgat Sammakia. “I am confident that SUNY Poly’s rigorous coursework and ‘real life’ learning environment resulting from collaborations with industry provide graduates with what they need to achieve success, and I am excited that the class of 2018 will be well prepared for years to come.”

The keynote speaker at the Albany campus ceremony was Dr. Douglas Grose, who will lead the New York Center for Research, Economic Advancement, Technology, Engineering, and Science (NY CREATES) as president. This new non-profit organization aims to further enable industry-oriented next-generation R&D and economic development projects in the region and across New York State. Dr. Grose most recently served as CEO of GlobalFoundries and has extensive semiconductor industry experience.

Sixty-six graduate and undergraduate students, including thirty-seven from New York State and several international students, were honored during the commencement ceremony which took place at SUNY Poly’s Zero Energy Nanotechnology (ZEN) Building at the Albany NanoTech Complex. Fifteen students earned Ph.D.’s, eight earned master’s degrees, and of the 43 undergraduate students attending the institution’s Albany campus who were awarded Bachelor of Science degrees, 10 graduated with a Nanoscale Science concentration and 33 had a Nanoscale Engineering concentration.

As the graduating students join a growing number of SUNY Poly alumni, many plan to pursue a variety of career or educational opportunities. Of those graduate students who have definitive career or educational plans after graduation, half have already accepted positions at prestigious corporations, especially those with efforts focused on semiconductor research and development, such as at GlobalFoundries, in Malta, NY, or IBM in Albany, NY, or they have secured opportunities at organizations such as Oak Ridge National Laboratories, among others. One graduate in particular was awarded $350,000 to work on his startup company while receiving a post-doctoral appointment to the national lab.

A number of graduating students are also choosing to continue their work by pursuing other advanced degrees in New York State, with several planning to continue their education by enrolling in SUNY Poly’s nano-based Ph.D. programs. Of those undergraduate students with definitive post-graduation plans, half have already secured positions with advanced technology-focused corporations, such as Tokyo Electron, which has its TEL Technology Center America located on the SUNY Poly Albany campus, with many expecting to pursue graduate studies at top institutions around the country, including Cornell University, Carnegie Mellon University, Duke University, SUNY Poly, and Yale University, among others.

SUNY Poly is the world’s first educational institution to offer comprehensive curricula focused on nanotechnology research and development. SUNY Poly’s educational offerings are supported by the world-class intellectual and technological resources of its Albany NanoTech Complex, which is complemented by its Utica campus, offering a broad array of hands-on educational degree programs in everything from engineering and the arts to cybersecurity and nursing. The Utica campus hosted a commencement ceremony for more than 500 students who received an undergraduate degree, and nearly 200 who earned a graduate degree or certificate of advanced study.

SUNY Poly is New York’s globally recognized, high-tech educational ecosystem. SUNY Poly offers undergraduate and graduate degrees in the emerging disciplines of nanoscience and nanoengineering, as well as cutting-edge nanobioscience and nanoeconomics programs at its Albany campus, and undergraduate and graduate degrees in technology, including engineering, cybersecurity, computer science, and the engineering technologies; professional studies, including business, communication, and nursing; and arts and sciences, including natural sciences, mathematics, humanities, and social sciences at its Utica/Rome campus; thriving athletic, recreational, and cultural programs, events, and activities complement the campus experience. As the world’s most advanced, university-driven research enterprise, SUNY Poly boasts billions of dollars in high-tech investments and hundreds of corporate partners since its inception. For information visit www.sunypoly.edu.