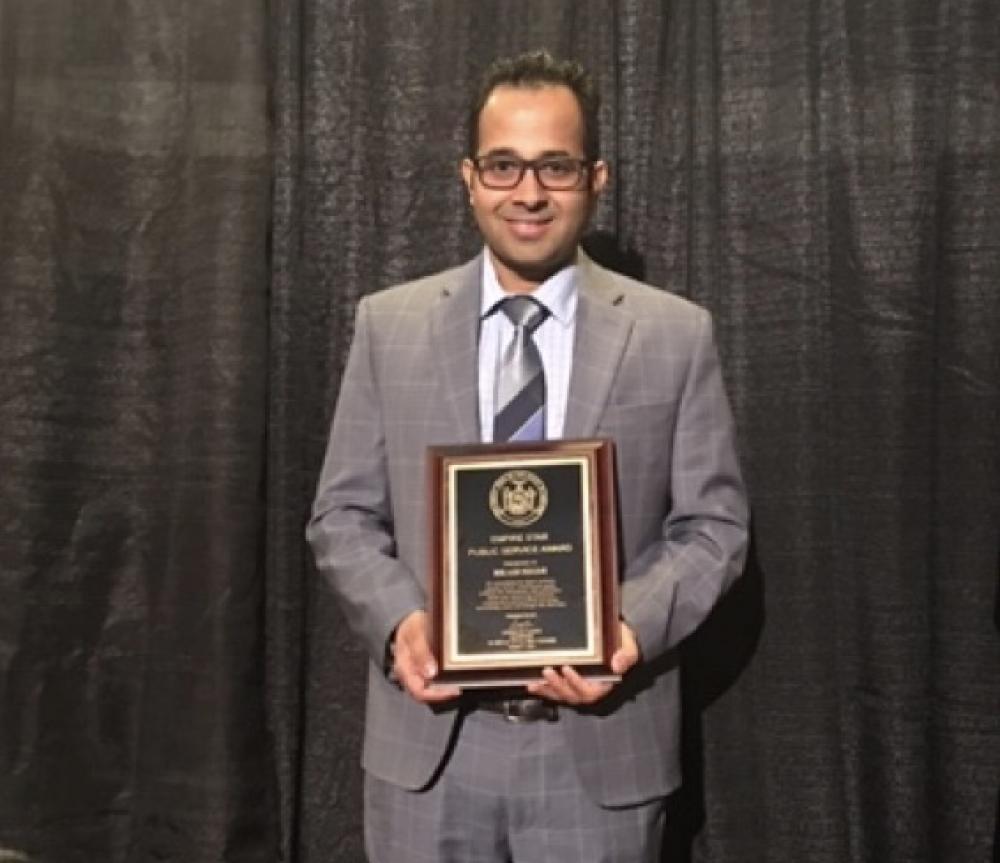 After receiving news in February that he had been selected for the award - the highest honor that can bestowed upon a New York State employee – Bikash was completely surprised.

Originally nominated for the award in March 2018 by an anonymous individual, Bikash said once he found out he had won, “I was drowned in happiness. I couldn’t believe it myself, I was so excited.”

SUNY Poly Interim President Dr. Grace Wang said Bikash’s contribution to the college’s nursing program has made a positive difference in the lives of its students.

“I am thrilled with the news of Mr. Regmi being chosen as a recipient of the Empire Star Public Service Award. His sincere passion for nursing shines through in every student he has inspired,” said Dr. Wang. “On behalf of the students, faculty and staff at SUNY Poly, we offer our sincere congratulations.”

The 2017 SUNY Poly graduate’s path to a career as a Family Nurse Practitioner began in 1991 when, at the age of 7, his family was forced from its home country of Bhutan to a refugee camp in Nepal.

“The camp environment was not really good,” Bikash recalls. “There was poor sanitation, people were dying because of lack of proper healthcare and one of the things in the beginning was there were no toilets and people would have to go to the bathroom near the forest.”

One of the most jarring images that comes to mind is his refugee camp, at times, overflowing with waste. “Many people died because of the communicable diseases and I always wished that I could go into the medical field and help these people.”

Seventeen years later, while still living in the camp, Bikash heard about the opportunities offered to refugees in the United States and decided to take his shot at The American Dream.

“I heard that the U.S. was the land of opportunity and it welcomes people from around the globe. As soon as I heard that, I started the process and came to this country on Sept. 3, 2009,” he said.

He settled in the Syracuse area where he began volunteering for Catholic Charities, helping to educate various refugee groups about the importance of donating blood. He became a SUNY Poly student in 2012, becoming involved with campus groups and local organizations including the Nursling Department Curricula Committee, the Advisory Board for Munson Williams Proctor Arts Institute (MWPAI), and Sigma Theta Tau.

He also received the 2017 Chancellor’s Award for Student Excellence, which recognizes students in the SUNY system who excel in areas of leadership, campus involvement, community service, career achievement and the creative and performing arts.

After earning his master’s degree in May 2017, he joined SUNY Poly as a faculty member the following semester.

Although Bikash didn’t exactly follow his father’s career path, he carries one piece of advice his father gave him at an early age: “He always said that education is the only thing nobody can snatch from you. Property you can own and lose, but education is the one thing you’ll have for life.”