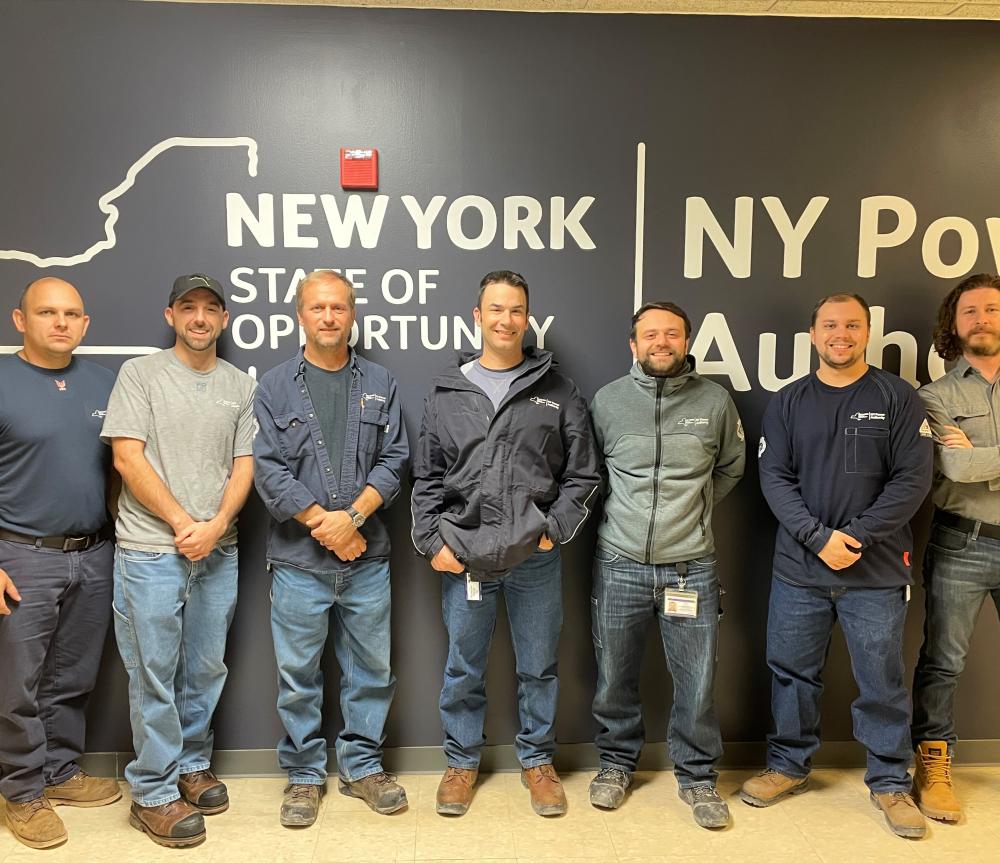 Utica—When Jason Nasto found a career as an Instrument and Control Supervisor at the New York Power Authority (NYPA) he soon decided to finish an Electrical Engineering Technology degree from SUNY Poly, graduating in 2019. He knew this educational experience would serve him well, but what he might not have known at the time was how the same degree program would also unlock numerous other careers for additional SUNY Poly alumni—all at one major employer.

“SUNY Poly had a wide variety of academic courses with fantastic faculty,” said Jason. “It gave me the confidence, tools, and skills to tackle any task. All the instructors are incredibly passionate about what they're teaching and always accessible when help is needed.”

At NYPA, Jason is in charge of all the equipment in one of the most critical switchyards in New York State. But to make sure such important work gets accomplished, he can’t do it alone. He needs a team of highly qualified individuals working together and supporting each other.

It turns out, seven out of nine on that NYPA team are SUNY Poly graduates. Most of them graduated recently with a similar degree in Electrical Engineering Technology (EET) and are now I&C planners, I&C engineers, or technicians. They all say the main ingredient in their success has been their SUNY Poly educational experience, and they were excited to share a few thoughts.

Below, meet the NYPA Wildcat Alumni:

“I cannot put into words how many doors have been opened due to SUNY Poly. A solid foundation is key to success, and SUNY Poly has served me well as a foundation.”

“I got my two-year degree in EET from MVCC in 2008, and immediately transferred to SUNY Poly as an EE major.  By my second year of college, I was married, had a real job, and was traveling quite a bit (for my job), which unfortunately resulted in me quitting college. But fast-forward 10 years, I realized that my engineering career was not going anywhere, and I decided to come back to SUNY Poly. SUNY Poly was very accommodating to a returning student, with many courses available after hours—and in the summer. In fact, I was able to go back for three semesters (full time), while maintaining a high-pressure full-time job, and balancing a home life which by this point included a couple of kids.

“My four-year EET degree opened so many doors; the number of jobs available was overwhelming. Having that piece of paper certainly offered many different career paths However, the piece of paper was not only a piece of paper, but a document backed by a quality curriculum. SUNY Poly offers many great professors that are passionate, knowledgeable, and are subject area experts in their field of study/teaching. Currently, I have a career in maintaining various pieces of power equipment, communications equipment, and test equipment. SUNY Poly gave me a base to understand why things work, how things work, and how to interpret various data to maintain the systems as a whole.”

“My BS degree from SUNY POLY has opened up many doors for me in my career. Soon after I graduated, I applied for and was awarded an industrial controls engineering job with Magna Powertrain in Syracuse, NY. I worked for four years in that capacity and then moved on to a system engineering job at Nine Mile Point Nuclear Generating Station. I am now currently working as an Electronic and Relay Technician at the New York Power Authority. I can honestly say that SUNY Poly has afforded me some great opportunities and I am enjoying a very satisfying career as a result.”

"SUNY Poly has best impacted my career by providing me the necessary foundational skills that have allowed me to adapt and learn quickly in the real-world work environment. Taking courses such as digital logic, control systems, and robotics have really allowed me to excel in the instrumentation and controls field of work."

“SUNY Poly made a huge impact on my career by basing their curriculum so closely with what I am doing daily here at the New York Power Authority. Most of the theories and hands-on learning from my years at SUNY Poly I use time and time again to do my job precisely and effectively.”

“After earning my AAS degree from MVCC, I transferred into the Bachelor of Science in Electrical Engineering Technology program at SUNY Polytechnic Institute. Obtaining my bachelor’s degree was the best decision I have made. It was instrumental in getting interviews and eventually finding a job in my field within a few months after graduation.

“Aside from the technical education, the capstone courses I took taught me a lot about the real world; leadership, teamwork, decision-making, and meeting deadlines were all key skills that the program highlights.

“I was introduced to the New York Power Authority at a SUNY Poly Career Fair and after speaking to the reps and doing some research, I knew that this was an organization where I wanted to build my career. After graduation, I accepted an engineering role with a local Systems Integrator specializing in Industrial Automation and Process Control. I kept developing my skills and experience, eventually getting hired by NYPA as an Instrumentation and Control Technician.

“My education opened many doors for me and it’s something I take great pride in.”