Scope: Evaluate the role of oxidants in the control of cancer, aging and infectious disease.

Goals: Provide R&D for the development of targeted antioxidant based therapies for the treatment of metastatic cancer, aging and infection disease.

Redox control of senescence and disease

Project 1: Fifteen percent of American adults (>30 million) suffer from some degree of chronic kidney disease (CKD). Medicare costs for patients aged 65 years or older with CKD were about $45 billion in 2012. Globally from 8-16% of the population worldwide is affected by CKD and in 2014 kidney disease was the 9th ranked cause of death nationally. Strategies to reduce burden and medical costs related to renal disease are critically needed. Senescence cells have recently emerged as contributors to age-related renal pathology. While cellular senescence has evolved as a protective mechanism to arrest cells exposed to oncogenic insult, chronic senescence activation promotes loss of renal function. The harmful effects of senescence are attributed to high secretory activity, commonly referred to as the Senescence Associated Secretory Phenotype (SASP).

Strategies which limit the amplitude and duration of SASP will serve to delay age related renal decline. SASP activation is reliant on production of interleukin-1 alpha (IL-1α) and we have shown that H2O2, likely of mitochondrial origin, regulates IL-1α transcription and processing in this process. H2O2 signals, in part, through oxidative inactivation of specific protein tyrosine phosphatases (PTPs) that coordinate a broad array of signaling networks. Conversely, IL-1α mRNA stabilization and translation in SASP is also regulated by mTOR. Hence, we have been defining the interplay between H2O2 and PTPs that govern mTOR signaling and how this contributes to gene silencing and post-transcriptional processing of the SASP. Fibrotic insult is a precursor to loss of renal function and we are developing targeted strategies which restrict mitochondrial H2O2, mTOR or SASP and can limit renal fibrosis.

Project 2: The wide array of proteases, including matrix metalloproteinases (MMPs), produced in response to many pathogenic insults, confers a unique proteolytic signature which is often disease specific and provides a potential therapeutic target for drug delivery. We have been testing the use of Collagen-based Nanoenhanced MMP-Responsive Delivery Vehicles (NMRDVs) that display MMP specific degradation in diverse in vitro models of proteolysis. We demonstrate that collagen particles comprised of protease substrates (primarily collagen) can be made of uniform size and loaded efficiently with assorted cargo including fluorescently-labeled mesoporous silica, magnetic nanoparticles, proteins and antioxidants. We also demonstrate that pathologic concentrations of proteases produced in situ or in vitro display protease specific cargo release. Additionally, we show that the collagen-based particles display bright fluorescence when loaded with a fluorophore, and have the potential to be used as vehicles for targeted delivery of drugs or imaging agents to regions of high proteolytic activity. 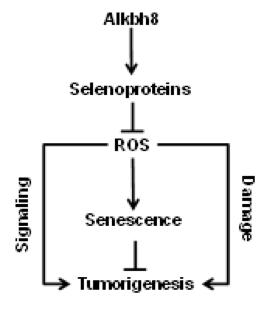 Project 3: Maintenance of the GSH redox cycle is reliant on the activities of selenocysteine-containing GSH metabolizing enzymes. Selenocysteine is the 21st amino acid and does not contain a dedicated codon. Selenocysteine incorporation during translation requires UGA-stop-codon recoding, which uses specifically modified tRNA for accurate decoding. Dynamic changes in tRNA modification are an epitranscriptomic signal because they regulate gene expression post-transcriptionally. The Begley lab has shown that the stress-induced translation of many selenocysteine containing ROS detoxifying enzymes is dependent on the Alkbh8 tRNA methyltransferase. Alkbh8 enzymatically methylates the uridine wobble base on tRNASelenocysteine to promote UGA-stop codon decoding. Surprisingly the Alkbh8-deficient (Alkbh8-/-) mice reproduce, thrive normally and live past 15 months, suggesting they adapt to the selenoprotein deficiency, high ROS and increased DNA damage levels. In collaboration with the Begley lab we have been investigating a potential adaption mechanism, we have used molecular, biochemical and genomic approaches to demonstrate that Alkbh8-/- mouse embryonic fibroblasts (MEFs) and some organs display markers of senescence and a senescence gene signature. Using theAlkbh8-/- mice we are testing the hypothesis that senescence occurs in vivo as a result of defective epitranscriptomic signals that controls selenocysteine utilization and prevents tumor emergence.