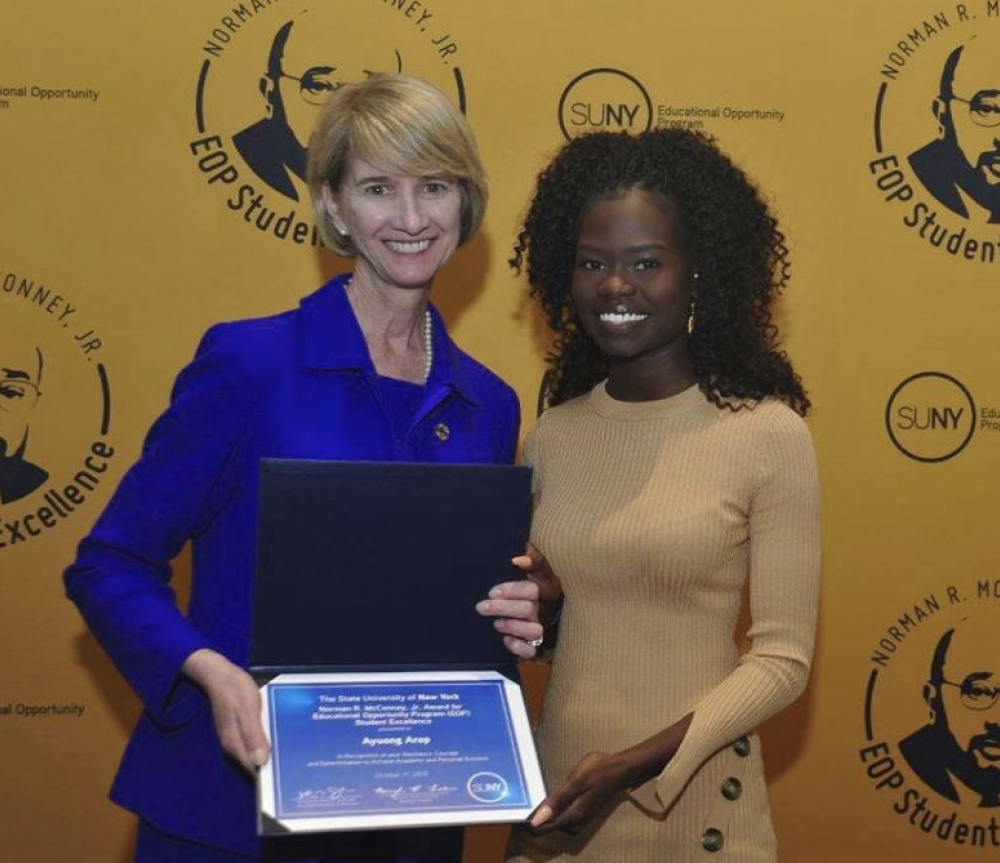 The award, which recognizes outstanding Educational Opportunity Program (EOP) students for their academic achievements, is named for the late Norman R. McConney, Jr., a graduate of the University at Albany and former Assistant Dean for special programs at SUNY. McConney Jr. helped draft the legislation that established the Educational Opportunity Program as a statewide program. EOP exists to ensure access to high-quality education for historically disadvantaged students with potential by offering the resources needed to graduate from academia and return to their communities as leaders.

In the midst of a civil war Ayuong, along with her family, fled to Egypt from war-torn Sudan in pursuit of safety. While in Egypt her family faced the challenges of securing food, income, and security.

“On the first day of each month, we would walk through the streets of Cairo in hopes that the church would give us money for food,” Ayuong recalls. “Both of my parents worked nearly 24-hour shifts to barely have enough money to pay the bills and buy groceries.”

Believing that the United States would offer a promising education and a better life, they moved again. However, they still faced hardships similar to their circumstances in Egypt.

“We still struggled to get clothes or food because we had rent, electricity, and water bills to pay. I remember standing in line with my mother when I was sixteen years old to apply for food stamps. I was in shock that my parents had to go through so much just so we could get an extra stipend to receive food. Although I appreciated the benefits we received, I knew this wasn’t the life I wanted.”

Ayuong traveled to New York City to receive the award at a reception and ceremony hosted by SUNY Chancellor Dr. Kristina M. Johnson on Oct. 17. In its first year, 42 students from across the state were presented with the new award.

“Receiving this award was a huge accomplishment, especially because I was recognized at the state level for my hard work and dedication to my personal goals,” Ayuong said. “I am grateful that there were people who fought for pipeline programs like EOP.”

During her first three years at SUNY Polytechnic Institute, Ayuong, a Biology major with a minor in Chemistry has grown as a leader. She found her passion for helping other EOP students as an ambassador. She has served as an EOP summer institute peer mentor for the last three summers and as a chemistry and biology tutor for incoming first-year EOP students. She also worked as a full-time academic researcher while preparing for her dental admissions test during the summer of 2019.

After completion of her first year, Ayuong interned at Columbia University Medical Center in the Summer Health Professions Education Program, a highly selective program where, out of 2000 applicants, 80 students participated. She has also participated in the Health Careers Opportunity Program at Marquette University, Summer Undergraduate Research Program here at SUNY Poly, and has maintained yearly notoriety on the President’s Achievement List and Dean’s List.

Since its inception in 1967, the EOP has provided access, academic support, and supplemental financial assistance to students from disadvantaged backgrounds, many of them (are) the first in their families to attend college. In its 52-year history, the EOP has served more than 75,000 students and evolved into one of the country’s most successful college access programs.

In the current academic year, SUNY has more than 11,000 EOP students on 48 SUNY campuses. EOP students often outperform their peers, with 73 percent of them graduating with a baccalaureate degree within six years.